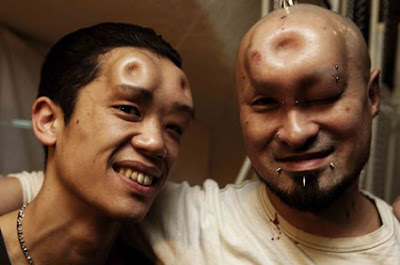 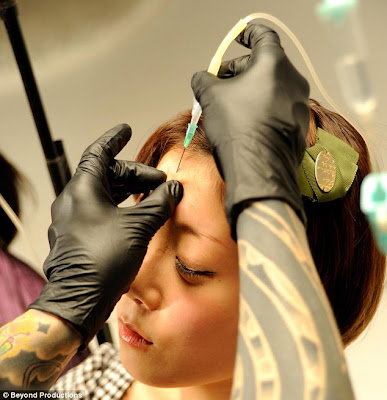 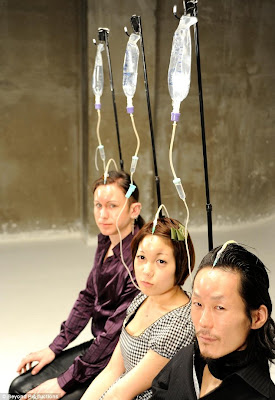 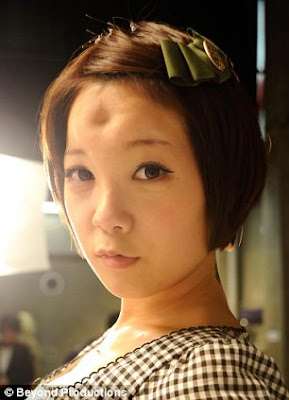 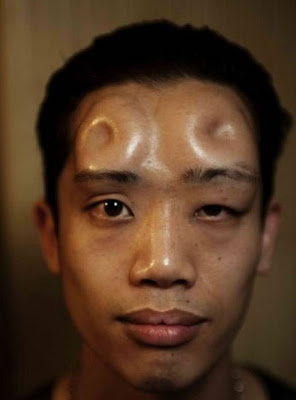 Could the bizarre 'bagel head' look be Japan's most extreme beauty trend yet?
貝果額頭，當下最夯的身體變妝術

A new television series has shed light on the bizarre Japanese trend for 'bagel heads'.
The extraordinary look, which is created by injecting saline注射鹽水 into the forehead, then pressing in the centre of the swollen area with a thumb, is a hit on the country's underground body modification身體改裝藝術 scene.
The dramatic results of the two-hour treatment last just 16-24 hours, after which the saline is absorbed by the body被身體吸收 and the forehead reduces back to its normal size.

The practitioner開業者/從事者(通常指的是律師或醫生) administering the treatment進行灌注的工作, Asami, is heard saying: 'You really need to do it the right way, to reduce the risks.'
The sensation is evidently uncomfortable. As it punctures刺入 the skin, John says: 'Ooh... That's a needle going into my head... Ooh.'

Once fully inserted, the outline of the needle is clearly visible under the surface of the skin, and the saline slowly begins filling the forehead. At this point, John describes feeling 'a slight stinging sensation輕微的刺痛感'.

“It's a relaxing sensation令人感到放鬆的感覺, kind of tingly有點刺痛, and also a building pressure皮下的壓力不斷升高(指皮膚越來越繃) that's kind of slow and steady that kind of feels like it's putting me to sleep”

He then reports a trickling feeling有水細細流下的感覺 so intense, he is convinced that the liquid is falling down the outside of his face, asking the room: 'Is there something dripping down滴下 my head? ... I can really feel it in there, trickling down.'
After an hour or so, the brave trio勇氣三人組(指這三個人敢親身體驗這項身體裝飾藝術)'s foreheads look significantly swollen, and they appear to have become accustomed to the needle in his head.
'Right now it's kind of a relaxing sensation, kind of tingly有刺痛感的, and also a kind of building pressure that's kind of slow and steady that kind of feels like it's putting me to sleep讓我昏昏欲睡,' John says.

Over the course of two hours, around 400cc of saline is transfused注射/灌入 into each forehead. Once it has reached the desired size, the practitioner removes the needle, and presses his thumb into the centre of the swelling.

When the thumb on his forehead is removed John looks stunned, and the room breaks into a round of applause.充滿了鼓掌聲
'Oh sweet buttery bagels - I'm impressed!' he exclaims. 'I look delicious!'

The finished look is deemed 'cute' by Marin, who sits beside him. Once she and Scorpion, have also had their needles removed and thumbprint made, the trio admire their new looks with delight.看著自己的新面孔，露出滿意開心的表情
The trend was initially這股風潮是由…所引發 sparked by the artist Keroppy, according to an interview in Vice last year.

He told the magazine how he came across it in Toronto, Canada, at the extreme body modification convention極端身體改裝大會(透過外在的裝飾，讓身體變型，注射生理食鹽水、在身體上穿環打洞等都算是身體改裝) Modcon in 1999.  'I happened to meet Jerome, who was the person who pioneered創先使用 saline infusions,' he explained. 'We stayed in contact, then eventually I experienced saline with him in 2003 and he gave me permission to bring it to Japan.

'I set up a team in Tokyo to administer infusions for other people. That’s been going since 2007.'  He said fans of the procedure enjoy 'saline parties' about twice a year, though some people will take their 'bagel head' to clubs and fetish parties戀物派對(通常fetish都是指對某種/某些事物有偏執的熱愛或貪戀).

The saline injections can be done on any part of the body - some people have even had 'scrotal infusions陰囊注入', he revealed - but for the most part, it is just the forehead.
On its (thankfully) short-term effects, Keroppy joked: 'We enjoy being freaks怪咖 for the night!'