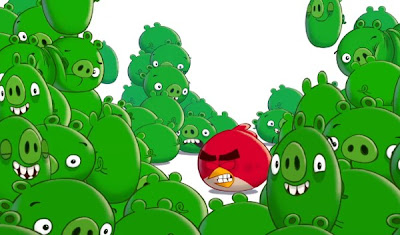 Picture from the Bad Piggies trailer

Not so New From NPR

On Thursday, Rovio — the company behind the hit熱賣/爆紅 mobile game "Angry Birds" — released推出 a new game. "Bad Piggies" is a spinoff副產品 of "Angry Birds" and it’s already among the top downloads in the iTunes App Store. Robert Siegel talks to Ina Fried, senior editor at All Things Digital about how profitable獲利 "Angry Birds" has been and whether Rovio can replicate複製 its success.
ROBERT SIEGEL, HOST:
This soundtrack配樂 has accompanied untold wasted hours浪費的時間 around the globe. It is the music from "Angry Birds," the addictive令人上癮的 mobile game that surpassed超過 one billion downloads in May.
SIEGEL: Today, Rovio, the company that created "Angry Birds," released a new game, "Bad Piggies." It's a spin-off. Instead of slinging birds用彈弓彈鳥 to destroy the pigs, you create vehicles工具 the pigs use to steal the birds' eggs. Within hours of "Bad Piggies" release, it came to top paid download on the iTunes app store.
Well, joining me to talk about the "Angry Birds" phenomenon現象 and the future of "Bad Piggies" is Ina Fried, senior editor at All Things Digital. Welcome to the program.
INA FRIED: Thanks, Robert.
SIEGEL: And while Rovio is releasing this new game, does the original原版/原創 "Angry Birds" still command the same interest同樣引發大眾的興趣(吸引/關注)? Are millions of people still downloading it or is the world tired of using a slingshot彈弓 to fling彈/拋/擲 cartoon birds at pigs?
FRIED: Well, it's not on the tip of everyone's tongue讓大家津津樂道的話題 but it is still very popular. And one of the things that keeps the "Angry Birds" so popular is the fact that Smartphones, the devices that these are played on, are still taking off受歡迎/夯 around the world. And so, even as one or two people start putting down the "Birds," somebody new gets a Smartphone and tries it out.
And the other big thing is nothing bigger has come along. So the big danger for Rovio is if someone came out with a more addicting time waster讓人玩到廢寢忘食、浪費時間的遊戲.
SIEGEL: So, since this is a new area of the big, popular app for mobile devices手機裝置, can we learn anything from the trajectory軌道 of "Angry Birds?" That is, did it zoomed急速竄升 to a billion right away? Did it take a while to get there? Is it still big in other parts of the globe and less so in the U.S. now?
FRIED: It took off pretty quickly. And I think one of the things that they did is they found the magic formula, which for games is a game that, first of all, is endearing惹人憐愛的/可愛的. And second of all, it's easy to pick up and hard to master好上手但是難破關的遊戲. And that was, you know, going back to board games and other strategy games, that's always been the magic formula is something that people can get into quickly but want to perfect.
SIEGEL: And at 99 cents a download, how profitable has "Angry Birds" been for Rovio?
FRIED: It's actually been incredibly profitable非常賺錢/獲利非常驚人. They made about 66 percent profit margins盈餘 in the last quarter they reported. And, you know, they make money on the game. Obviously 99 cents isn't a ton一個遊戲不到一塊錢美金不是什麼大錢, but they also have turned it into an empire of T-shirts and stuffed animals and fruit Gummi chews但公司早已經憤怒鳥變成一個生產T恤、絨毛玩具跟軟糖的帝國, and all sorts of other "Angry Birds" related products.
SIEGEL: You mentioned the successful formula of "Angry Birds" was that it was easy to play but hard to master. From what I saw of the "Bad Piggies" trailer, it looked a little bit more complicated複雜 to me.
FRIED: Yeah, it's a - you know, I only picked it up for a second. It just came out today. I mean, it's sort of this classic physics game經典的物理學遊戲 that's become pretty popular on the iPhone. I think one of the dangers here is this is a pretty crowded field這個領域裡競爭者眾 that they're stepping into. So they're really counting on仰賴 the strength of the characters to motivate刺激 people to play. So I think the most dangerous thing here is that they're moving into crowded territory這個領域已經有很多類似的遊戲了.
SIEGEL: And any chance you think that "Bad Piggies" could be as big as "Angry Birds?"
FRIED: I think it would be tough to be as big. I think Rovio would be quite happy if it proves just as popular as some of their other titles. Their other non-"Angry Birds" title, "Amazing Alex," also zoomed to number one or in the top pretty quickly, but it's faded退燒 pretty quickly as well. And it's now not in the top 100 games in the U.S.
SIEGEL: Ina Fried, thanks for talking with us about it.
FRIED: Thanks for having me.
SIEGEL: That's Ina Fried, who is senior editor at All Things Digital.
MELISSA BLOCK, HOST:
This is NPR.
NPR