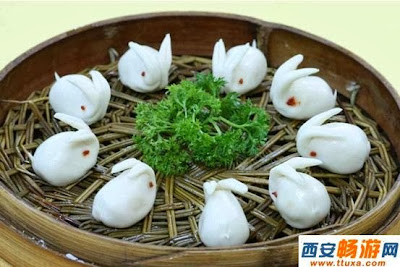 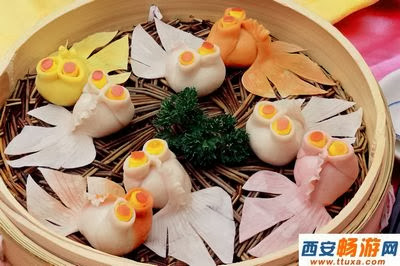 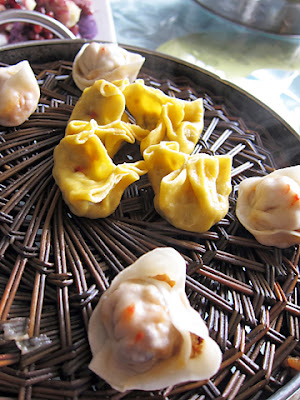 In the Beginning, There Were ... Dumplings?
By GEOFF BRUMFIEL
RENEE MONTAGNE, HOST:
All this week MORNING EDITION will be celebrating the international phenomenon國際現象 that is the dumpling餃子. Dumplings are tasty好吃的 little packages of surprise goodness令人驚喜的好料. They can be a snack on their own or part of a stew丟進爐子裡燉煮. So we'll be traveling the world exploring dumplings in different cultures.
And to kick off Dumpling Week, we had NPR's Geoff Brumfiel look into what makes dumplings so special.
GEOFF BRUMFIEL, BYLINE: When I told Scott Drewno we were going to spend a week talking about dumplings, he got excited.
SCOTT DREWNO: A week, you could do a month if you wanted to. I mean there are a thousand different types of dumplings - different folds打的折數與形狀不同, different fillings餡料不同, different sauces沾醬也不同.
BRUMFIEL: Drewno is executive chef 行政主廚at the Asian fusion restaurant, The Source, in downtown Washington D.C. He offered to get me into the spirit of things感染一下事物的氣氛 by helping me make some pork dumplings. You start with ground pork豬絞肉, stir in some spices香辛料 like garlic and ginger大蒜與薑.
DREWNO: We just want to continue to mix until the mixture gets a little bit tacky稠黏的 and a little bit sticky有黏性的.
BRUMFIEL: And put it in a little circle of pastry餃子皮. Then you fold it in half, pleat it 餃子打折closed with your thumb and forefinger.
DREWNO: You're looking good. Now all you have to do is you want to have a flat seat on the dumpling把餃子立起來. Put the pleats up and then just press it down with your fingers,
BRUMFIEL: Oh, like that.
DREWNO: Pat it down.
BRUMFIEL: OK.
DREWNO: And yours look great
BRUMFIEL: Hey, what do you know? It's a dumpling. It's the first dumpling of Dumpling Week.
Chef Drewno isn't the only one who thinks Dumpling Week is a great idea.
KEN ALBALA: I'm very you're doing a Dumpling Week.
ALBALA: That's all I can say. It takes great insight了不起的洞察 and guts to do a Dumpling Week.
BRUMFIEL: Ken Albala is a food historian at the University of the Pacific in Stockton, California. He admits some people don't get the dumpling有些人對於餃子沒甚麼概念.
ALBALA: In fact I had a message from a friend this morning who said, I'm going to be in Warsaw and is there anything to eat there apart from dumplings? Someone, please help me.
BRUMFIEL: But Albala says that dumplings are actually an important part of human history.
ALBALA: Almost without doubt there are prehistoric dumplings史前餃子.
BRUMFIEL: As soon as humans got their hands on grain穀類, they had to cook it.
ALBALA: The way they would do it is by hollowing out a log將樹幹挖空.
BRUMFIEL: They'd fill it with water, put in a couple of super hot rocks from the fire. The rocks get the water boiling.
ALBALA: And then you can throw anything in. And I think it's a very fine line between一線之隔 putting in loose flour or meal, and having a kind of porridge 粥out of it. Or putting in lumps塊狀的...
BRUMFIEL: And dumplings out of it. Given a choice between gruel稀飯 and dumplings...
ALBALA: A dumpling, I don't know, it’s more - it seems like more fun to me.
ALBALA: Maybe that's it.
BRUMFIEL: OK, so that's all a little speculative推測的. But dumplings definitely have been around for a long time. Fuchsia Dunlop is a food writer who specializes in Chinese cuisine中國菜. When archeologists考古學家 in the Northwest of China opened graves from the eighth century Tang Dynasty...
FUCHSIA DUNLOP: They excavated a wooden bowl filled with dumplings, that look exactly the same as those that you'd seen served in a restaurant in the area today.
BRUMFIEL: And today, the dumpling is king in China. Dunlop knows of one restaurant that serves more than 300 kinds.
DUNLOP: And they're shaped like pumpkins and walnuts胡桃 and rabbits and chickens, all different shapes and different fillings, different colored skins不同顏色的餃子皮 and so on.
BRUMFIEL: Dumplings also change as they're adopted by different cultures with different diets. Take one common Chinese dumpling: the wanton.
DUNLOP: There are sort of versions right across central Asia. And then if you go right across to Italy, you find the same thing called a tortellini義大利麵餃. So the same methods, the same shapes of wrapped dumpling all the way from Italy, right across Asia to China, even Korea.
BRUMFIEL: Back at The Source in Washington D.C., we've boiled up our pork dumplings. And now Chef Scott Drewno is finishing them off in the frying pan平底鍋.
DREWNO: To me, you know, if I was stranded on a desert island and I could only eat one thing, it would be a pork dumpling.
DREWNO: GBD: golden brown and delicious.
BRUMFIEL: They are delicious. And at the end of the day, that's what makes dumplings so popular in so many places - they're kind of addictive 讓人上癮的.
Geoff, NPR News.
MONTAGNE: You're listening to MORNING EDITION from NPR News.