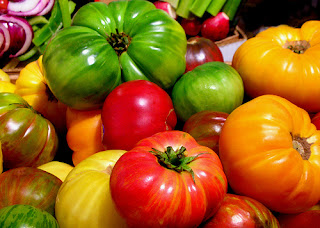 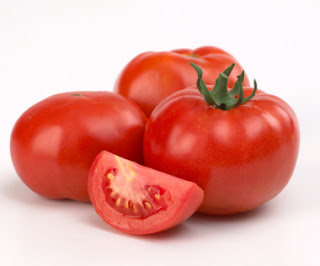 
How The Taste Of Tomatoes Went Bad (And Kept On Going)
番茄淪喪實錄
From NPR
Finally this hour, a break from Supreme Court coverage. We're going to take a few minutes to talk about the state of the modern tomato當今蕃茄的處境(狀況). Today, scientists revealed a small but intriguing耐人尋味(有意思的)chapter in the story of the tomato, a story, some would say, of its downfall向下沉淪. NPR's Dan Charles explores how the tomato came to be so abundant量多, yet lost so much of its taste.
DAN CHARLES, BYLINE: We'll start with the old tomatoes, varieties that people grew a century or more ago. Some people still grow them, like Eric Rice at Country Pleasures Farm near .
ERIC RICE: , the one here in the front, for example, is a tomato from , the orange one.
CHARLES: It's been around, he thinks, since the early 1800s早在1800年左右就存在了. He grows others called Cherokee Purple, Dr. Wyche and one called Mortgage Lifter.
RICE: When I was in North Carolina, actually, I first started tasting heirloom tomatoes(透過純種蕃茄品種栽培的復古蕃茄，不經過雜交配種。英國稱之為heritage tomato)when I was in graduate school and decided I really liked them.
CHARLES: He liked the vivid taste滋味鮮實. He liked the unusual colors: yellow, orange, purple. Now, he grows them to sell to customers at a farmers' market農夫市集 in Washington, D.C. But Rice admits all that tomato personality蕃茄品種的特質 can make heirlooms harder to grow and sell.
RICE: Heirloom tomatoes don't ship very well很難運送 because they're softer. And frankly, they are all different kinds of shapes and sizes.
CHARLES: So they're harder to pack很難包裝. And there's something else you'll notice as these tomatoes start to get ripe. The part of the tomato near the stem, what's called the shoulder of the fruit接近莖部的前端部位, stays green longer.
RICE: I think it is an issue for some consumers because folks do buy with their eyes, and green shoulders also mean that it's not entirely ripe沒有完全熟透 or not as soft and as tasty there.
CHARLES: Now, those green shoulders turn out to be surprisingly significant. In this week's issue of the journal Science科學期刊, scientists are reporting that when people eliminated剔除 them from modern tomatoes, some of the tomato's taste disappeared too. This is how it happened. Sometime before 1930, back when all tomato plants were heirlooms, a tomato grower noticed a plant with distinctive fruit一個特殊的果實. These tomatoes turned red from stem to tip從莖部到蒂頭都變紅 in a uniform way一致性, no green shoulders.
It was a new genetic mutation基因突變, and it seemed like a great thing. Somebody saved seeds from that plant and grew more. Plant breeders used those plants to crossbreed with other tomato varieties to get rid of their green shoulders too. Ann Powell at the of , , says this uniform ripening trait spread through the entire tomato industry.
DR. ANN POWELL: It's a little bit hard to find a variety that's in modern production that doesn't have it.
CHARLES: Powell is one of the scientists who now has discovered the genetic change responsible for uniform ripening. She admits she sort of stumbled across it by accident.意外發現的
POWELL: The experiment was completely backwards in how we did it.
CHARLES: She was looking at some genetically engineered tomato plants透過基因工程培育的植物 that were created so that scientists could study the effects of different genes. Each plant contained an added gene from another plant, a little weed野草 called Arabidopsis阿拉伯芥(一種屬於十字花科，會開花的野草) that plant scientists like to work with. Powell noticed that one of these added genes resulted in green tomatoes that were really dark green. It struck her as odd讓她覺得很奇怪.
POWELL: The leaves were not dark green. It was only the fruit that were dark green.
CHARLES: Powell thought to herself this gene seems to have an interesting effect on how tomato fruit ripens. I wonder if some tomato plants have their own version of this dark-green gene. She and her colleagues looked for it, found it, and by coincidence巧合, so did some other researchers on the other side of the country at Cornell University. They discovered that this natural tomato gene, when it works properly, produces those green shoulders on tomatoes. And the darker green color comes from extra chlorophyll多出來的葉綠素, which is what converts sunlight into sugars將陽光轉化為糖份 for the plant. In fact, those dark green shoulders were making these old tomatoes sweeter and creating more flavor. The uniform ripening mutation disabled this gene使這個基因失去能力(無法作用).
DR. HARRY KLEE: We find out that, oh, my goodness, this is one of the factors that actually has led to the deterioration of flavor走味(吃起來口感與滋味越來越差) in the commercial tomato.
CHARLES: That's Harry Klee, a professor at the . Klee has been exploring the chemistry and genetics of tomato taste. He says tomato breeders made a lot of compromises做出許多妥協 like this over the years as they created tomato plants that produce more fruit and firmer, more rugged堅固不容易軟爛的 fruit. But now, Klee says, with some of this new science, we have a chance to undo some of those decisions可以收回之前的決定，重新再來一次.
KLEE: You know, so what I tell people is that we can get 100 percent of the flavor and 80 percent of the agricultural performance of the modern varieties with very little work.
CHARLES: We can start with some of the best heirlooms and then bring in some of the disease resistance genes that modern varieties have, increase yields增加收成的量 at least a little bit. Consumers may have to change their expectations, Klee says. They may have to get used to tomatoes with green shoulders, for instance.
KLEE: They're going to have to go in and say, oh, look, that one's got that little discoloration變色 at the top, that means it must be good.
CHARLES: But these tomato plants probably won't produce as big a harvest, Klee says. So the only way they're likely to show up in your local grocery store is if consumers can recognize them and pay a little more for them.
Dan Charles, NPR News.