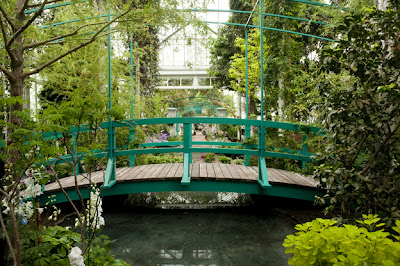 Monet's Green Thumb: How Art Grew From A Garden

Copyright ©2012 National Public Radio®. For personal, noncommercial use only. See Terms of Use. For other uses, prior permission required.
Heard on Morning Edition
June 7, 2012 - DAVID GREENE, HOST:
Claude Monet's garden at Giverny吉維尼(莫內故居) in France draws half a million visitors every year. And now, Americans will get their chance to enjoy the serenity靜逸 of that scene. The New York Botanical Garden紐約植物園 in the Bronx, is bringing together an exhibit that recreates the garden Monet so loved, along with photographs, videos, rare documents and two of Monet's paintings.
Here's NPR's Margot Adler.
MARGOT ADLER, BYLINE: Whether or not you have ever experienced Claude Monet's garden in France, in Giverny, if you walk into the recreation(按照原樣)重建 at the New York Botanical Garden, prepare to be stunned. Scaled down按原比例縮小 to be sure, but in some ways even more riotous本來的意思是喧鬧，這裡指的是茂盛 in its abundance of flower花卉種類繁多 and colors.
You step through the portal正門處, through a façade建築物正面 of Monet's house with its salmon-colored鮭魚色(深橘色) walls and green shutters百葉窗, out into a long corridor走道/長廊 of flowers.
VANESSA CALVO: When I walked in here, I thought, wow.
ADLER: Nine-year-old Vanessa Calvo and adults Mary Quinton and Karen Rhodes.
CALVO: I was speechless.
MARY QUINTON: Like going into a paradise, really beautiful.
KAREN RHODES: Oh, just got goose bumps.
ADLER: All these flowers - more than 150 species, which will change as the exhibit runs through three seasons - have been grown from seed從種子的階段開始種植 by the gardening team at the New York Botanical Garden. Todd Forrest, head of horticulture園藝, says the goal is to capture the essence of Monet's garden捕捉莫內花園的精隨.
TODD FORREST: The incredible, overpowering color令人難以抗拒的色澤 and the spirit of natural beauty that infused注入 and informed這邊指構成 his paintings, we hope that visitors to the whole exhibition will leave understanding that Monet would never have been the painter he became if he wasn't the gardener he was.若非對園藝如此在行，莫內不可能畫得出那些精采的油畫(沒有花園就沒有曠世傑作)
ADLER: Monet rented the house in Giverny in 1883 and lived there until his death in 1926. He, his children, and stepchildren worked in the garden, and eventually, as he became wealthy and bought the house and more land, he hired five gardeners.
The exhibition includes two paintings of flowers, one early and one never before shown in the States - darker in color and tone色調較深/陰鬱, painted during the First World War. There's also his artist's palette畫家的調色盤 of colors, the only one in existence. But clearly his garden was another palette. Forest says Monet was constantly tweaking加加減減做出改變 his garden, experimenting with plants, there was even a part of the garden he called paint box beds調色區.
FORREST: Where he experimented with color combinations, and texture油畫表面的質感 and height combinations, kind of off the beaten path嘗試一些沒人做過的, before he was happy enough with those combinations to include them in his garden.
ADLER: Oh, my heavens.
FORREST: Lupines.狼(這邊是花卉名稱，羽扇豆又稱魯冰花)
ADLER: Ah, but these are lupines not like you see anywhere.
FORREST: We've been growing these plants, in some cases, for a year or more. And we've been preparing for the exhibition for the past two years
ADLER: Brilliant blue delphiniums飛燕草, pink and white fox glove指頂花, roses and poppies罌粟花. Mixed with wildflowers, one of Monet's innovations, like mullein毛蕊花 you might find by the roadside. Forrest thinks Monet would be pleased with this recreation, but also a little envious, since here every spring flower seems to be blooming at once.
Paul Hayes Tucker is a Monet expert and curator策展人 of this exhibition.
PAUL HAYES TUCKER: Monet would be green with envy忌妒, pink with envy, white with envy, over what Todd and his team have been able to do, both in terms of the abundance of the flowers and their size and their color.
ADLER: Tucker chose the two paintings that you can see in a separate gallery. The gardens, he says...
TUCKER: They defined賦予定義 him. They gave him life. They added spiritual zest精神上的熱情 to his being. And they obviously were absolutely central重要的 to his conceptions about art.
ADLER: There wouldn't be a Monet's garden without the water lilies睡蓮. Todd Forrest shows me the outdoor pool where they're just beginning to bloom. Some are the same types from the same nursery in France where Monet went. Monet first saw colorful hybrid混種的 water lilies at the 1899 Paris World's Fair.
There must be at least 15 or 20 different types of water lilies.
FORREST: More like 50 on display in this pool alone.
ADLER: Monet painted the water lilies over and over. Paul Hayes Tucker says the gardens are a living work of art活的藝術作品, like a still life靜物畫(複數形態是still lifes).
Margot Adler, NPR News, New York.
GREENE: And you can see pictures of Monet's Garden in the Bronx at NPR.org.