英語每周一文 : Big Brother is Watching You 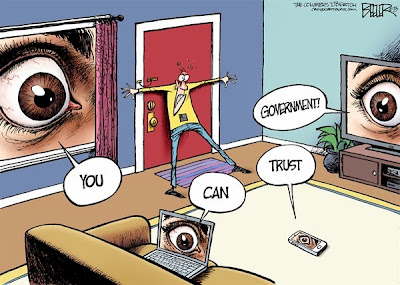 There is nowhere to hide with Big Brother watching

“Big Brother is watching you”: The horror of being constantly spied on經常被監視的恐懼 by the government, as depicted by George Orwell in his famous novel “Nineteen Eighty-Four,” seems to have become reality已經成真 in Taiwan.
It is nothing new that a ruler would want to spy on監視 his people. A dictator獨裁者 may be anxious to take total control of the country; a president may want to know what moves his or her political rivals政治上的死對頭 are plotting. Spying may be done in the name of以…之名 crime prevention; it may be needed to enhance public safety, or against infiltration by foreign enemies or terrorist attacks用以對抗外敵或是恐怖攻擊的滲透.
We've seen many examples of governments spying on their people in history.
Queen Elizabeth I is believed to have run an extensive network of spies working for her. Christopher Marlowe, one of the greatest English playwrights劇作家 of her reign統治期間, is said to have been a government spy.
Perhaps it is because of England's strong tradition of the government watching its people that it was the 18th century English philosopher Jeremy Bentham who put forward提出 the concept of the panopticon圓形監獄, a watch tower at the center of a prison where inmates' cells囚犯的牢房 are arranged in a circle around the tower.
The idea is to make it easy for the prison guards to watch the inmates. And the beauty, or horror, of that design is that inmates constantly feel they are being watched他們背監視 — whether there actually are prison guards inside the tower may be irrelevant不相關.
Orwell wrote “Nineteen Eighty-Four” in defiance of反抗 that panopticon tradition but, ironically, modern-day London has the most public surveillance cameras in the world, watching every corner of the city. It is just a step shy of the panopticonic vision, as citizens are still not watched at home. But do they really have the privacy they think they have?
In China, the tradition of the government spying on its people may be as strong as that in England. The most notorious and fearful spying network in Chinese history was run by eunuchs太監 during the Ming Dynasty明朝 (1368-1644). The spies helped the emperors control the government officials and the country, and very often, the emperors themselves were controlled by the spies.
Spying is of course nothing new並非新鮮事 in Taiwan. Wiretapping竊聽 of civilians by the military and law enforcement units — whether legal or illegal — has often been conducted. Not long ago, when Taiwan was still technically at war with與…對立 China, its people were constantly reminded of the threat and possibility that communist spies were around them. Such a propaganda宣傳 move actually turned each and every one of the citizens into a spy for the government as they suspected and monitored one another.
Now, like London, many big cities in Taiwan have installed public surveillance cameras supposedly根據推測 for crime-prevention purposes. And thanks to有鑑於/由於 modern technology, it is very easy for governments to spy on their people. Phone conversations can be easily monitored and recorded. All Internet activities are recorded by service providers.
The Edward Snowden controversy爭議 has revealed that the U.S. government has been spying on its people over the Internet. Internet firms' transparency reports have shown that many governments have asked them for user information. Taiwan is among those governments.
The requests for information from Internet firms may be legitimate, but it highlights the fact that強調了 few can really escape Big Brother. You think your home shields you from保護…不受侵犯
the surveillance cameras on the streets, but when you log onto Facebook or any other social media, or surf the Net, you are being watched.
Big Brother is really watching and the panopticon is really working — both enabled by使能夠 modern technology.