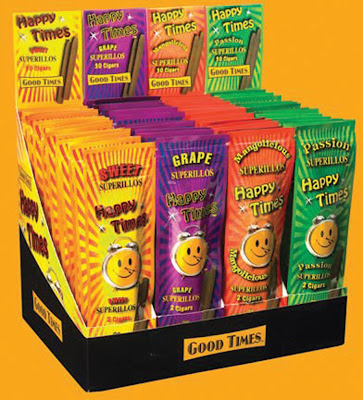 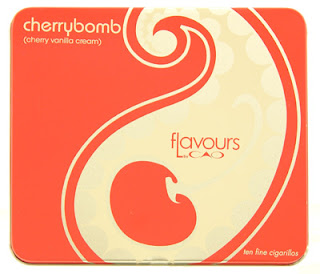 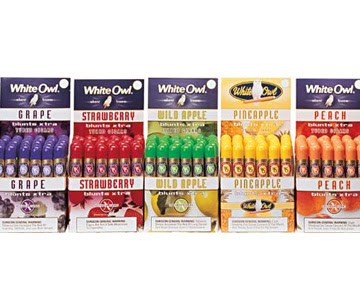 
Sweet Cigarillos And Cigars Lure Youths To Tobacco, Critics Say
By PATTI NEIGHMOND
RENEE MONTAGNE, HOST:
And among today's teens and young adults, there is a worrisome, unhealthy trend. Sales of little cigars are on Cigarillos. Their sales more than doubled, particularly among teenagers and 20-somethings. One reason? They're flavored有調味的 - sort of like candy. Jennifer Cantrell directs research at the anti-tobacco反菸 Legacy Foundation.
JENNIFER CANTRELL: We're seeing chocolate, cherry, wild cherry, strawberry, grape - pretty much every flavor you can think of that you might see in a gum or a candy product, we're' seeing in little cigars小雪茄 and cigarillos雪茄菸.
NEIGHMOND: To examine how heavily companies market to young people, Cantrell sent field researchers out to about 750 small grocery and convenience stores in Washington, D.C. She found stores in areas dominated by young people had far more ads for little cigars. They were outside the store, and they were clearly targeted to將目標設定給 a youthful eye年輕的目光.
CANTRELL: They're almost indistinguishable難以分辨的 from candy packaging糖果包裝. Some ads that we've seen on the outside of stores, it almost looks like a big box of colorful crayons蠟筆.
NEIGHMOND: And the price is right, too. Unlike cigarettes, which cost about $6.50 a pack and can't be sold individually, little cigars are wrapped in packages of one, two or three and average about 99 cents per cigar. The Altria Co., which makes one of the most popular cigarillos, says they market to adult tobacco smokers, not to children. Even so, Mayo Clinic researcher and public health advocate Mignonne Guy says little cigars are easier for kids to access容易讓小孩子取得(購買) than cigarettes, but no less harmful裡面的尼古丁一點也不少(害處一樣多).
MIGNONNE GUY: The average cigarette has approx 8 milligrams毫克(千分之一克) of nicotine尼古丁 in it. The average cigar can range anywhere from 100 to 200 milligrams of nicotine.
NEIGHMOND: That's a lot more nicotine than in a cigarette. And the problem is today's teens and young adults don't just puff吹噴, like in the old days. They inhale吸入.
GUY: They're treating it like a cigarette, and they're using them like cigarettes. They will say, "I'll use them when I'm really stressed out壓力大," after a test, or after a long day's worth of work.
NEIGHMOND: Guy says kids as young as middle-schoolers 中學生are trying little cigars. And evidence shows the earlier in life people start using tobacco products菸草產品, the harder it is to quit.
GUY: We've done a great job in communicating to the general public大眾 about the dangers of cigarettes, but we have not done a great job of communicating the harm - and the risk and the danger - of little cigars and cigarillos.
NEIGHMOND: About four years ago, the FDA expanded延伸/擴張 oversight 監督of cigarettes, restricting advertising and banning禁止 most flavors. The agency is now considering whether to take a similar strict stance嚴格的姿態 when it comes to regulating little cigars and cigarillos.