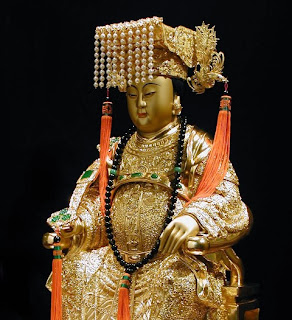 
For the Love of Matzu

She is known and loved by millions in Asia and is called the patron saint of Taiwan. Matzu was once a real person who lived in China long ago. One day, she had a vision that her father and brother were caught in a storm at sea. Legend has it that Matzu magically went into a trance. While in this sleep-like state, her spirit went to save her family members. However, her mother saw her sleeping body and tried to wake her. When that happened, Matzu dropped her father, but luckily, she was still able to rescue her brother.
Today, Matzu is worshipped as a goddess of the sea and the protector of fishermen and sailors. Temples can be found in many fishing towns and on the coast of many Asian countries. Followers are very devoted to her because she is also said to be Guanyin who had come back to life.