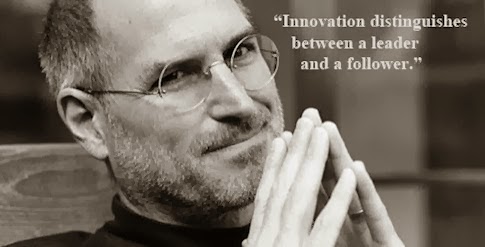 
Steve Jobs' Greatest Legacy May Be Impact On Design
Heard on All Things Considered
Now, Steve Jobs did not invent the computer or the mouse or the smart phone or MP3 players, but his vision願景 made them accessible更容易讓人接受, user-friendly容易操作的 and enormously popular. As NPR's Laura Sydell reports, one of Steve Jobs' greatest legacies留給後人的東西 is his impact on design對於設計的影響力.
LAURA SYDELL: It's true, Steve Jobs didn't invent computers, though he was obsessed with著迷 them from an early age. In 1975, at the age of 20, Jobs was part of the Homebrew Computer Club, a group of early computer enthusiasts電腦狂熱份子 obsessed with making computers more popular.
JOHN GAGE: People all together in a room, jostling相互競爭, bubbling with ideas發想新點子, bringing in new technology, new chips晶片, new displays陳列, new networks網絡, new software, everything new.
SYDELL: At least, it was new back then, says John Gage, who was a member of the Homebrew Computer Club. Gage says from the get-go從一開始, Jobs' talent was to take all those different pieces of technology and incorporate合併 them into one design.
GAGE: With the result - an elegant, simple, human, usable device. That was Steve's genius. He saw clearly how to take this enormous complexity極其複雜的 and make something a human being could use.
SYDELL: The first Apple II computer, which came out in 1977, was designed to be more like a home appliance家電. Up until then, you had to know how to put them together yourself. But it was the design of the Macintosh that set the public on fire引發眾人矚目/令人為之瘋狂/風靡. In 1984, Steve Jobs introduced the first Mac in front of an audience of thousands.
UNIDENTIFIED MAN: Hello, I am Macintosh. It sure is great to get out of that bag.
SYDELL: The computer voice went on to poke fun at取笑/開…的玩笑/揶揄 IBM computers. Never trust a computer you can't lift, it said. It had a mouse and the graphical user interface使用者介面 - not the first computer to have them, but it was the first time a computer with those features was commercially successful. The Mac made the computer a creative device for the average person一般人. Again, John Gage.
GAGE: He brought music and art. He brought visual sensation視覺感官的刺激. He brought capabilities to the computer that were not dreamed of by those that were at the lower levels of putting together the chips that would do the fast computation快速計算 or store all the bits of a picture儲存一張相片所有的位元.
SYDELL: In 1985, Steve Jobs was pushed out of Apple in a boardroom coup被蘋果的董事會給踢出去. The company floundered掙扎/經營得很辛苦. He returned in 1997. He stripped down the company讓公司脫胎換骨(strip down 本意是拆解) the way he stripped down design, cutting out product lines開發產品線. Robert Brenner was at Apple during the time Jobs was gone. When he returned, Brenner says he unleashed the power of the company's designers將公司的創意設計能力全部釋放.
ROBERT BRENNER: There obviously is a culture and an environment there as a designer if you're good that will allow you - to support you in doing great things.
SYDELL: The iMac, released in 1998, looked unlike any other personal computer. Up until then, computers were little ugly plastic boxes. The iMac was cute and curvy有曲線的. In 2001, the iPod reshaped重新塑造 the idea of an MP3 player. It had a simple user interface with a wheel on the front that you could turn to scroll through all your songs in a little window. Then, in 2007, Apple entered the smart phone market. Jobs poked fun at the other smart phones and then he introduced the iPhone.
STEVE JOBS: What we want to do is make a leap frog product革命性的先驅商品 that is way smarter than any mobile device has ever been and super easy to use. This is what iPhone is, okay?
SYDELL: Brenner says Jobs was obsessed with the best materials, not plated plastic鍍金塑膠, but real machined metal; not black plastic, but glass. Brenner says Apple would build a new factory if that's what it took to make the product just right.
BRENNER: Very few companies would do that, say, here's an object we believe needs to be made this way, let's go out and create an entire infrastructure重新設定一個新的研發與生產結構 to do it.
SYDELL: Brenner says Steve Jobs raised the profile of design提升了設計本身的輪廓，也就是提升了設計的層次與價值. Brenner, who now has his own firm, says there's a dark side to that. Everybody wants their products to look just like Apple's.
BRENNER: If it's not a machined piece of aluminum with black glass and one button, it's not good.
SYDELL: Still, Brenner says the world of computers is a better place because of Steve Jobs電腦世界如今如此美好‧這些皆歸功於賈伯斯. The design was friendly and that made computers more than machines, it made them objects that customers could love.
Laura Sydell, NPR News, San Francisco.