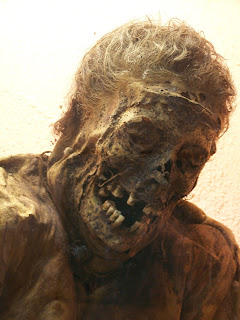 Researchers have found hardened arteries硬化的血管 after scanning掃描 mummified bodies木乃伊屍體, some of which were more than 3,000 years old. A more modern diet and lifestyle were once thought to be the causes of heart disease, but a new study recently published in the journal The Lancet 刺胳(音同哥)針醫學期刊(為歷史最優久的英國醫學周刊)may prove otherwise. Audie Cornish talks to cardiologist心臟病專科醫師 Randall Thompson, one of the study's authors, about the findings.

CARTOON CHARACTER #2: That's a mummy and it's moving.

CORNISH: A little "Scooby Doo史酷比卡通" for you there. But that mummy sounds like a cry for some Tums舒緩胃脹氣與消化不良的藥, right?

CORNISH: But seriously, some scientists have been studying a group of real mummies and they've discovered that 34 percent of them probably suffered from hardened arteries. Yes, about a third of the mummies apparently suffered from heart disease. The study is published in the science journal The Lancet, and it raises a big question. Does that mean heart disease might simply be part of the aging process老化的過程, not related to diet after all?

Joining us now is Randall Thompson. He presented the findings at a meeting of the of Cardiology in . Randall Thompson, welcome to the program.
DR. RANDALL THOMPSON: Thank you. It's very nice to be here.

CORNISH: So, I read in this study that guys did CT scans(computed tomography)電腦斷層掃描 of 137 mummified bodies from different parts of the world. Walk us through帶領我們稍微了解一下 this study and essentially what you found.

And so, we concluded that this disease, atherosclerosis動脈硬化 - the disease that causes heart attacks心臟病 and strokes中風 - appears to be related to human aging and is not particularly characteristic of the any diet or lifestyle.

CORNISH: And you mentioned four groups. Where did the different mummies come from?
THOMPSON: So the four groups were ancient Egyptians古埃及, ancient Peruvians古秘魯人, ancestral Pueblans古葡耶貝拉人(墨西哥) from the North American Southwest, and ancient Alutian Islanders美國阿拉斯加的阿留申島民. Actually, the Alutian Islanders were not ancient. They were from the 1800s by the lives a traditional lifestyle, traditional for them, and that they were hunter-gatherers who hunted from kayaks愛斯基摩船 and so forth.

CORNISH: So you do the CT scans and what exactly is it that you find that leads you to believe that, you know, heart disease is his condition has been with us?

THOMPSON: Well, the tool we used was a CT scanner. And CT scans demonstrated the calcium鈣質 that are in arteries動脈. And the calcium is part of the disease process that causes heart attacks and stroke. So it's a clue線索. It's residue殘留物 that's been left behind and, as we've learned, it's there for a long time. In fact, it's there for hundreds, even thousands of years.

CORNISH: So what's there? Is it - are arteries still there...

CORNISH: ...in a mummified body? Or are you looking at just the calcium?

THOMPSON: What is amazing is sometimes the arteries were there. So these bodies are 3,000 years old or older, and we can still make out parts of the body - the aorta主動脈. We could see the calcium inside the aorta, inside the wall of the vessel血管壁. Now, some other times, the soft tissue, the arteries, had dissolved away and what was left was the calcium.

We'd see the calcium along the course of an artery. In those cases, we coded it as probable atherosclerosis動脈硬化, probable disease. And we categorized the mummies as having definite or probable, based on whether we could see the artery or not.

CORNISH: Now, should I feel any less guilty then about Big Mac consumption?
CORNISH: Or are there other factors here that could contribute to this?

THOMPSON: Right, so it may be that we have less control over getting heart disease than we like to think we do but that doesn't mean you shouldn't control the risk factors you should control. If you've got high blood pressure高血壓, you should have it treated. If you've got high cholesterol膽固醇, you should control your cholesterol. But there're certainly some diets that are healthier than others and certainly some lifestyles that are healthier than others, and we all ought to take care of ourselves.

CORNISH: Well, Randall Thompson, thank you so much for speaking with us.

THOMPSON: Thank you. It's a pleasure to be here.

CORNISH: That's Randall Thompson, cardiologist at St. Luke's Mid-America Heart Institute. He was the lead researcher on the study that found signs of heart disease in mummified bodies.