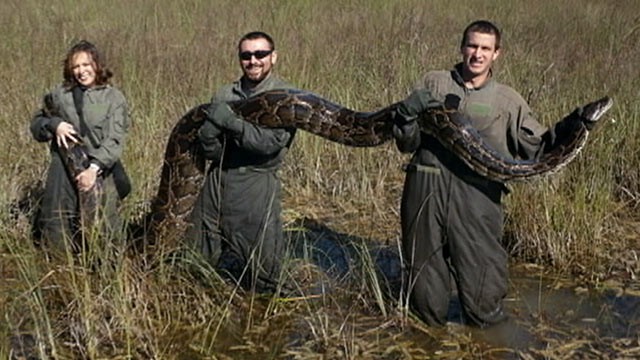 (Reuters) - A nearly month-long hunt for Burmese pythons in Florida's Everglades was wrapping up收尾 this week with little to show for成效不是那麼亮眼 the efforts of more than 1,500 would-be snake slayers指這次參加活動的殺蛇者 armed with everything from clubs棍棒 and machetes大刀 to firearms槍枝 and spears茅叉.

A spokeswoman for the Florida Fish and Wildlife Conservation Commission, which organized the hunt, known as the Python Challenge這是這次活動的名稱(巨蟒挑戰), said on Thursday that only 50 Burmese pythons had been reported captured or killed as part of the event.

That means the hunt, which kicked off with great fanfare敲鑼打鼓熱鬧地展開 on January 12 and ends on Sunday, barely put a dent in根本對…沒啥影響 the population of non-native非當地 snakes that have made a home and breed in the fragile Everglades wetlands沼澤濕地.

Officials have said previously that the population is believed to have grown to as many as 150,000. The snakes are one of the largest species in the world and native to Southeast Asia. But they found a home to their liking in the Everglades when pet owners started using the wetlands as a convenient dumping ground.寵物飼主把佛州的沼澤區當成是丟棄蟒蛇的方便地。

Wildlife biologists say the troublesome invaders令人頭疼的入侵者(其實蟒蛇是美國人當初進口，自做自受的最佳範例，現在居然說蛇是入侵者…蟒蛇又沒翅膀，要不是人類，怎麼可能從東南亞飛來美國啊？), which are notoriously evasive非常難捕捉，因此而惡名昭彰 and have no known predators沒有天敵 in Florida, have become a major pest最令人討厭的有害動物 and pose a significant threat形成非常大的威脅 to endangered species like the wood stork林鸛(一種鳥類) and Key Largo woodrat基拉戈林鼠.

"They are very well camouflaged掩飾 and you can literally be practically right on top of them without being able to see them," said Fish and Wildlife Conservation Commission spokeswoman Carli Segelson.

"They are very evasive," she added. "It's kind of luck of the draw(因為巨蟒難抓，所以獵捕時)要靠點運氣, if you just happen to be in the right place at the right time when one of these things is out there."
The state wildlife agency was offering prizes of $1,500 for the most pythons captured or killed as part of the hunt and $1,000 for the largest python. The prizes are due to be announced at an awards ceremony頒獎典禮 set for February 16.

Segelson said the Python Challenge, the first hunt of its kind, drew at least 1,567 hunters from across 30 states and Canada.

"I'm very happy to report that we have not heard any reports or injuries or people getting lost," she said.
A Burmese python found in Florida last year set a record as the largest ever captured in the state, at 17 feet, 7 inches. The snake weighed nearly 165 pounds (75 kg).
(Reporting by Tom Brown; Editing by Dan Grebler)

Will Pythons Slither To Rest Of The ?

You are listening to ALL THINGS CONSIDERED from NPR News.
Should the federal government be in the business管閒事 of banning exotic snakes禁止外國蛇種? Take Burmese python緬甸蟒, for instance. The threat威脅 they pose帶來的(威脅) to the Everglades沼澤 is well documented有詳盡的紀錄. Pythons have been breeding繁殖 in South Florida since the 1990s, and some studies have indicated they're spreading蔓延. Concerns that pythons could move into other states led to a nationwide prohibition國家禁令 on their importation and sale進口與買賣. But as NPR's Greg Allen reports from Miami, some researchers now argue that such a far-reaching影響深遠的 ban was unnecessary.

GREG ALLEN, BYLINE: There are several exotic snake species that have become a problem in the , but for wildlife managers, the biggest headache is the Burmese python.
UNIDENTIFIED MAN: (Groan) P-52 folks, and she's angrier and stronger.

ALLEN: Earlier this year, researchers with the U.S. Geological Survey美國地質調查局(為美國內政部管轄的科學機構)captured the largest Burmese python yet in . In a videotape, three USGS staffers工作人員 wrestle the snake out of a plastic crate塑膠箱子 to measure it.
UNIDENTIFIED WOMAN: Wow. You're having to use all your muscle, aren't you?

UNIDENTIFIED WOMAN: To hold her head.

UNIDENTIFIED MAN: Yeah. And she's still stronger than me.

UNIDENTIFIED WOMAN: Do you know where her...

ALLEN: This snake was 17 feet, seven inches long and a female carrying 87 eggs. Wildlife managers are working to get a handle on the problem找出問題的解決方案 of exotic snakes in South Florida, but the snakes have already made a big impact極大的影響. One study suggests in Everglades National Park pythons have reduced the population of raccoon浣熊, possums袋貂, deer and other mammal species哺乳類物種 by 90 percent. To help combat the problem解決問題, the federal government聯邦政府 earlier this year banned importation and sale of Burmese pythons. A study several years ago by USGS found pythons could potentially spread up the East Coast and west to . But Elliott Jacobson, an emeritus professor榮譽教授 of zoological medicine at the University of Florida, says a new study questions how far beyond South Florida pythons could spread.

ELLIOTT JACOBSON: These maps give a very false sense of distribution錯誤的分布判斷.
ALLEN: In a study published in the journal Integrative Zoology整合動物學期刊, Jacobson and other researchers looked closely at the low and high temperatures found along the East Coast in the python's projected habitat range推斷出的棲息地範圍. Freezing temperatures零下(極冷的)溫度 are deadly for pythons.

JACOBSON: The bottom-line基本的 conclusion was the number of freezing days in the winter is going to limit the ability of this animal to spread beyond extreme South Florida.
ALLEN: Jacobson says this new information shows the federal government overreacted反應過度 when it imposed a national ban on a species that's a problem just in Florida. Brady Barr agrees. He's resident herpetologist爬蟲學家 with the National Geographic Society. He says the new study shows something he and other researchers have maintained堅稱 for some time that Burmese pythons can't spread far beyond Florida's three southern-most counties郡(美國次於州的行政區，在英國則是最大的行政區). Barr says that's because, unlike native snakes, pythons can't tolerate cold and they lack the instinct to hibernate缺乏冬眠的直覺.

BRADY BARR: They don't have the innate ability與天俱來的能力 to find hibernacula冬眠地(單數為hibernaculum ), to find places to hide or to be warm. They just - they don't know how to do that.
ALLEN: That question - whether snakes from tropical climates like pythons may take measures to adapt找出適應的方式 to the cold - is one that divides herpetologists. Gordon Rodda, now retired from USGS, helped write the report showing pythons could potentially spread throughout the southeast He says there's nothing in this new report to change his thinking.

GORDON RODDA: We know that Burmese pythons in the more high-altitude高緯度 portions of their range do, in fact, hibernate冬眠. The question then is, how do they acquire that behavior to do so?
ALLEN: Later this week, this is a question that may come up in Congress美國國會. A House committee眾議院委員會 is holding a hearing聽證會 on whether to extend擴大/延續 the ban on Burmese pythons to other exotic snake species. Greg Allen, NPR News, .