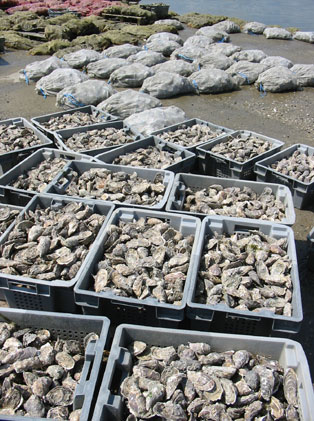 acidic 酸性的 alkaline 鹼性的
LINDA WERTHEIMER, HOST:
The shellfish industry貝類/甲殼業者 on the West Coast美國西岸 has had a bumpy few years過去幾年不太順遂/慘澹經營 and increasingly, it is pointing to climate change as the cause. Scientists believe the oceans are becoming more acidic as they absorb the increasing amounts of carbon dioxide二氧化碳 in the air, and they are not sure if oysters牡蠣 and other shellfish will be able to adapt適應to this change. Lauren Sommer, from member station KQED, has this report.
LAUREN SOMMER, BYLINE: Terry Sawyer does a brisk興旺的 business in oysters.
TERRY SAWYER: I take the shucking knife剝殼刀 and I'll go into the hinge鉸鏈(這裡指的是連接牡蠣兩片殼的中心點). You see there's no meat on the top shell?
SOMMER: His farm, Hog Island Oyster Company, is about an hour north of and today, his workers are sorting two kinds of oysters, Kumamotos...
SAWYER: Nutty, creamy flavor...
SOMMER: And Sweetwaters.
SAWYER: Some people do describe it as sweeter.
SOMMER: The oysters grow up in big mesh bags網袋 that sit in the cold waters of the Pacific. Sawyer gets the oysters from hatcheries孵卵所 in Oregon and Washington, but a few years ago, he started getting calls from his suppliers供應商. They couldn't fill the orders供不應求.
SAWYER: They would have tens of thousands of gallons of tanks that were absolutely full of larvae幼蟲(此字為複數，單數為larva)and they'd had the entire system die.
SOMMER: Their intake pipes吸入管 were pulling in the same sea water, but now it was more acidic, which makes it harder for oysters to build their shells牡蠣很難繁殖. The ocean is basically a giant sponge海綿 for carbon dioxide and scientists say sea water has become 30 percent more acidic since the start of the Industrial Revolution工業革命(第一次工業革命的時間點約為西元1760至1830年間，距今約250年). Sawyer's growing his own oyster larvae now so he'll have a more predictable supply可預期的/穩定的供貨, but he says there's no question that climate change is affecting his bottom line基本維生的出貨量.
SAWYER: We don't know if we're going to be able to survive the very real trending that is going on out there.
SOMMER: It's a trend趨勢/潮流 that doesn't just affect oysters. On a rocky point farther point, about two hours from San Francisco, oceanographer海洋學家 Tessa Hill of the University of California, Davis shows me tide pools潮水過後留下的水漥 packed with California mussels貽貝/淡菜. These mussels and other shelled animals like sea urchins海膽 and tiny marine snails are crucial重要的 to the marine food web海洋食物網, she says.
TESSA HILL: Probably most people like the fact that we have things like whales鯨魚 and salmon鮭魚 along our coast and those organisms生物/有機體 are likely to be impacted 受到影響because their food source食物來源 will be impacted.
SOMMER: In 100 years, oceans could be more than twice as acidic. So, Hill says, they're trying to find out if marine life can adapt. The mussels and sea urchins here could help answer that, since they're already part of a naturally occurring experiment.
HILL: They're facing the most acidic water that you'd see in the ocean today.
SOMMER: Marine life on the West Coast is blasted with充滿了 acidic water from the deep ocean during seasonal upwelling季節性的涌升流 in the spring and summer. So maybe they've developed ways to handle it.
HILL: SB would be ; MB is ...
SOMMER: Inside their lab, Hill shows me jars full of young mussels almost too small to see. Each jar is from a different part of the West Coast, from central to southern . Scientists are growing them in more acidic water to see if they have key genetic基因上的 differences.
STEVE PALUMBI: We found they have lucky genes.
SOMMER: Steve Palumbi is a biology professor at who is also working on the project. He found that some West Coast sea urchins have around 100 genes that make them better adapted to more acidic water. That makes them more likely to survive生存 and reproduce繁殖.
PALUMBI: This is good news because these organisms have the capacity能力 to deal with more acidification酸化. But it's not good news forever, because all it does is give us a little breathing room給一點點喘息的空間.
SOMMER: And not much breathing at that, says Palumbi. The ocean is acidifying faster than it ever has before. Organisms will evolve進化, he says, but probably not fast enough to keep up進化的速度可能趕不上環境的變化. That means the shellfish industry could face even bigger challenges down the road未來. For NPR News, I'm Lauren Sommer in .