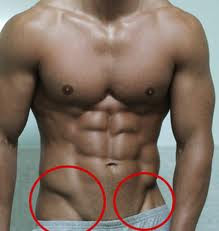 From Wikipedia, the free encyclopedia

The iliac furrow, also known as an athlete's girdle, Apollo's Belt or
an Adonis belt, is a term for a part of the human anatomy. It refers to either one of two shallow grooves of the surface anatomy of the human abdomen running from the iliac crest (hip bone) to the pubis. It is not a currently defined term in Terminologia Anatomica, though it has been used as a formal anatomical term in the past.