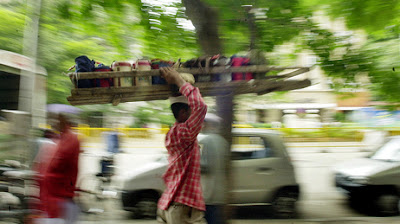 Heard on Morning Edition
August 28, 2012 - STEVE INSKEEP, HOST:
Think about how Americans often order pizza delivery. Now, imagine you had an arrangement to deliver lunch to your office every day. Imagine further that everybody in the office received a delivery every day, and so did everybody in the office next door. And imagine that it's Indian food.
A system somewhat like this has prevailed for a century in one of the world's largest cities, Mumbai孟買(印度第一大城，位於印度西部). Every day in India's business capital Mumbai, thousands of delivery men, called dabba wallahs達巴瓦拉(在印度從事午餐餐盒運送的快遞員) hand-deliver meals to doorsteps across the city. Elliot Hannon reports from Mumbai on how this traditional service is delivering meals from a 21st century source.
ELLIOT HANNON, BYLINE: For decades, Indian workers have had their lunches delivered, usually from home kitchens. The prices were cheap and the food traditional Indian fare傳統的印度飲食(fare這邊是食物的意思). But that's changing.
NITYANAND SHETTY: This is our main kitchen. It's like a 2,000 square foot平方英呎(等於3.3平方公尺) kitchen. This guy is making the South Indian menu. He's making a beetroot dhosa田菜根薄餅. Then the other guy is making an egg white omelet蛋白蛋包 over here.
HANNON: Nityanand Shetty is the head chef主廚 at Calorie Care, a high-end高級的, health-obsessed健康意識濃厚的 delivery joint運送站.
SHETTY: It's a new trend潮流 that's been started. It's a traditional dabba wallah, but at a premium kind of a thing最頂級的玩意兒, where the customer is conscious about what he's eating; he's not bothered about不會去在意 what price he's paying. So, the delivery chain remains the same, but the food, where it is coming from has changed.
SHETTY: The kitchen starts at night, 11 o'clock. The food comes out of the kitchen somewhere around 2, 2:30, 3 o'clock. Then the packing guys will start packing their food.
HANNON: It's a complicated process with hundreds of different meals, all with specific calorie counts每套餐點都有精確計算卡路里. Calorie Care relies on software to keep everything straight. After a night of cooking and a morning of packing, each meal is put into a small metal canister鐵製的便當盒, or tiffin, in time for the dabba wallahs pickup.
So when he comes at 9 o'clock, everything has to be ready for him because they are on a very tight schedule時間很趕. The dabba wallahs have a huge network網狀系統. That's the whole reason why we still use dabba wallahs. And they're very effective有效率.
HANNON: Right on time, Kishan Palvar arrives for the pickup from Calorie Care. He's one of 5,000 dabba wallah deliverymen who ferry運送 some 200,000 lunches to offices across the city. It works a lot like Takeout Taxi外送計程車. The couriers 快遞員make 500 rupees盧比（印度的貨幣單位）, or about $10, per person for a month of deliveries.
Palvar picks up several dozen lunches here. To make sure each lunch pail桶子 ends up at the right place, each container has a hieroglyphic-like coding system象形文字的密碼系統 painted on the lid盒蓋上.
KISHAN PALVAR: Yeah, code number, yes, 1.
HANNON: Palvar checks the codes, scoops up his cargo抬起他的貨車and heads outside to load up.
HANNON: He clips夾好 the containers to the handlebars腳踏車的把手 of his bicycle and starts his 45-minute cycle to the train station.
HANNON: At the station, the platform is jammed阻塞 and so are the trains.
HANNON: Three dabba wallahs haul拖曳 trays the size of dinner tables from the doorway of a commuter train通勤火車. Some are transferred換車 to other trains to go to different parts of the city. Lunches can be transferred three or four times before finally ending up on desktops of customers like Arif Bandukwala, who sits in a back office of a packaging plant包裝工廠 waiting for his vegetarian蔬食 entrée主食.
ARIF BANDUKWALA: I get my lunch everyday. Packing a lunch and bringing it, it doesn't serve the purpose因為沒有好處而被視為沒有必要. And also what I like about the food is it's less of salt, so it suits our appetite符合我的口味.
HANNON: Before he leaves, the delivery man collects yesterday's container and the process過程 starts all over again for tomorrow.
For NPR News, I'm Elliot Hannon.
INSKEEP: This is NPR News.