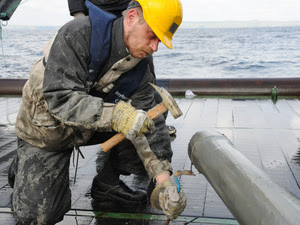 Ancient Deep-Sea Bacteria Are In No Hurry To Eat

May 17, 2012 - MELISSA BLOCK, HOST:
Back when dinosaurs ruled the Earth, some hardy bacteria強悍的細菌 took up residence棲居 in the bottom of the Pacific Ocean太平洋. Eighty-six million years later八千六百萬年前, they are still there. And the new study says they are living the most Spartan lifestyle堅毅且缺乏樂趣的生活方式 known on this planet.
NPR's Richard Harris has that story.
RICHARD HARRIS, BYLINE: Out in the middle of the ocean there's a place called the Pacific Gyre太平洋環流 where almost nothing reaches the seafloor海床. Nutrients養分 from the world's rivers don't get out that far. Most plankton浮游生物(結尾ter單數) that die in the water dissolve long before they can reach the seafloor far below.
Hans Roy says it's a rare day indeed when even a single particle顆粒 lands in any given spot on the bottom.
HANS ROY: If you imagine that a grain of sediment一粒沉澱物 falls on the surface, it will take a thousand years before the next grain will sit on top of it.
HARRIS: As a result, it has taken millions of years for a thin layer of sediment to form.
Roy, from Aarhus University in Denmark丹麥奧胡斯大學, was part of an expedition探險遠征隊 in 2009 to sample採樣 that ancient sediment. And amazingly enough, he found living bacteria buried in that clay. Amazing because there are almost no nutrients down there for them to feed on攝取(食物).
ROY: They left the surface 86 million years ago with one lunch box, and they're still eating out of it. It's like they're splitting a pie and they just keep splitting in half, and in half and in half, but nobody ever eats the last crumble碎屑. It's quite remarkable.
HARRIS: Roy says in the latest Science magazine that those bacteria may have the world's slowest metabolism新陳代謝最緩慢的細菌, with barely enough只有一丁點/幾乎不足夠 oxygen and nutrients to keep them alive. He talks about his own food intak食物攝取 by way of comparison.
ROY: I weigh 140 pounds and I eat a few pounds of food every day. So it will take me a month or two to eat my own weight. These organisms生物/有機體 will take a thousand years to eat their own weight.
HARRIS: Roy can't say exactly how old the individual bacteria he studies are. They may have been reproducing複製/再生 extremely slowly since the time of the dinosaurs. Or the individuals could be millions of years old, rebuilding themselves just fast enough to repair the inevitable damage of aging.這些細菌的再生速度只能快到剛好修補衰老所帶來的損害
In any case, these microscopic life顯微鏡下的生命 forms have lifecycles生命週期 that defy human intuition超乎人類想像.
ROY: That's so much slower than our own, that in our eyes it looks like suspended animation停格的動畫. This is pretty much like if you would stand up and look at a tree to see if it grows at all, you won't see anything because you're just looking at the wrong time scale錯誤的時間量程(時標).
HARRIS: But if you could stand there a hundred years, you would see something.
ROY: Definitely, but my contract runs until October.
HARRIS: Happily, nature has run that experiment on the seafloor. And one reason scientists are interested in this extreme lifestyle極端的生活模式 is because it provides clues線索 about the absolute minimum conditions最低限度的狀況 required to sustain life維持生命.
Andreas Teske, at the University of North Carolina in Chapel Hill, says that's useful for people looking beyond our planet for signs of life.
ANDREAS TESKE: We would like to know how far down can we go with respect to energy supply for life. So we have to look at the most difficult places on Earth地球上生存條件最險峻的地方. And the deep subsurface is certainly one of these most difficult, and at the same time - just by volume體積, by space空間, by extent寬度 - one of the most dominant原意是最具優勢或是支配性的，此只占最多面積的(此指海洋) places on Earth.
HARRIS: So these bacteria are likely quite abundant充足的. And Hans Roy from Denmark says they're very likely to be here long after we're gone.
ROY: These organisms have no clue that we're even around. They could be sitting down there for 100 million years, the whole surface could be one scorched desert, and they still wouldn't know it.
HARRIS: On the other hand, we, presumably, have more fun.
Richard Harris, NPR News.