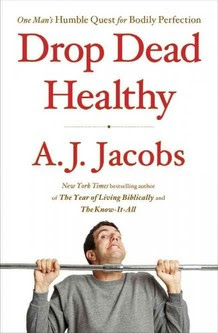 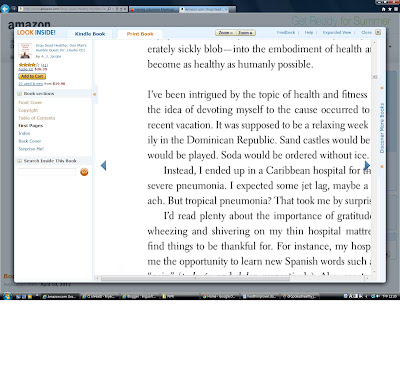 Copyright ©2012 National Public Radio®. For personal, noncommercial use only. See Terms of Use. For other uses, prior permission required.
Heard on Weekend Edition Saturday
April 7, 2012 - SCOTT SIMON, HOST:
A.J. Jacobs got sick on a tropical vacation and his wife looked at him in his hospital bed and said: I don't want to be a widow at 45. Mr. Jacobs was 41, with what he calls a python蟒蛇 that swallowed a goat body. He had tropical pneumonia熱帶型肺嗜酸性粒細胞肺炎. He wasn't notably unhealthy, but he'd begun to feel some of the vulnerabilities脆弱易受傷 of age. He vowed to make himself healthier so that he could be around and vital活得健康(身心)好有能力 for his wife and three sons.
A.J. Jacobs, who once read the entire encyclopedia百科全書 to try to get smart decided to try to get healthy in two years, or perish writing about it.寫到至死方休 His new book: "Drop Dead Healthy." A.J. Jacobs, who is the editor-at-large自由編輯(通常由資深的文字工作者擔任，專門撰寫大型專題) of Esquire magazine君子(男性時尚雜誌), and appears on this program with occasional nuggets of unimportant information偶爾會為節目貢獻一些不重要的名言(或訊息), joins us from New York.
SIMON: A.J., thanks for being with us.
A.J. JACOBS: Thank you for having me.
SIMON: What are some of the diets you used to get there? I mean you tried almost everything.
JACOBS: I did. I tried dozens of diets. So I tried the paleo diet舊石器時代飲食, which is the caveman diet - lots of meat. I tried the raw food vegan diet生食蔬食. And I tried the calorie restriction diet卡路里控制餐, which is the idea is that if you eat very, very little - if you're on the verge of starvation瀕臨飢餓狀態 - you will live a very long time. Whether or not you want to, of course, is the idea.
And chewing, that's a good way to stop eating as much. There's a very passionate pro-chewing movement on the Internet called Chewdiasm細嚼主義. And...
JACOBS: They made that up, not me, so don't blame me for that.
SIMON: Good yontiff to everybody who professes Chewdiasm(此字與Judaism發音雷同，所以主持人跟來賓才會提到holy week猶太人的踰越節out there week.
SIMON: We know it's a holy week.
JACOBS: That's right, chew your matzo猶太人的發酵麵包.
JACOBS: But they say that we should be chewing 50 to 100 times per mouthful, which is insane發神經. I tried that. It takes like a day and a half to eat a sandwich. But their basic idea is right. If you chew, you'll eat slower and you will get more nutrients營養素.
SIMON: You had to be literally dragged into a gym來賓也是此書作者很不愛去健身房，所以要他去健身房不如要他去死，得拖著走。在英文中要被dragged這個動作就表示非常不情願，要脅迫強逼才能得逞. This is something your wife believed in but you didn't這句話是說，作者的老婆喜歡去健身房，覺得健身房運動有益健康，可是作者不這麼認為。.
JACOBS: Yes, I am not a fan of不喜歡 the gym. I actually prefer what I call contextual exercise這應是作者自創的字，本來contextual有上下文的意思，在此則是指利用日常生活中瑣碎的時間去活動身體, trying to fit exercise into every nook and cranny這是一句成語，一般意思是每一個可能的角落，這邊的意思是盡可能利用機會去 of my life. So I - you know, climbing the stairs or running errands跑腿的差事. I literally run errands(to run errands本來的意思是用雙腿去跑差事，引申為辦雜事，現代人run errands可以開車騎車去辦，不過作者強調他真的是用雙腿去幹活的). So I'll run to the drugstore, buy a toothpaste and then run home.
SIMON: A parenthetical附加說明(或是以括號說明) about your exercise regimen, the one you fell into. I learned the most shocking thing reading your book, about those before and after pictures you can see in gyms - in advertisements for gyms.
JACOBS: Oh, yes. Yes. Don't believe those necessarily. I mean, one of my favorite tricks伎倆 that they do is they'll go into a gym and find the guy who's in the best shape - the most shredded body - and then they'll pay him five, $10,000 to get fat.
JACOBS: And then they'll reverse前後順序顛倒 the photos. It's genius.
SIMON: You tried a number of exercise regiments and routines每日的例行運動. I think the one we want to talk about here, on a Saturday morning with a family program...
SIMON: ...is pole dancing鋼管舞.
JACOBS: Of course. I did take a pole dancing class. Yes, and, you know, I'm a trained journalist訓練有素的文字工作者, so I did notice that I was the only man and among about 50 to 75 women. So, you know, if you are a single man, then this might be something you might want to look in to.
SIMON: What does it do aerobically有氧運動功效?
JACOBS: It does...
SIMON: I guess if you're the only man in the class it steps up加速 your heart rate.
JACOBS: It's hard to hold on to that pole. And, you know, you build up some upper body上半身 strength.
SIMON: Yeah. What are some of the things that you tried that you have no use for?
JACOBS: Well, I would say that colonics這邊作者指的應是大腸水療colon hydrotherapy and juice cleanses果汁腸道療法 are not going to be a big part of my life生命中很重要的事情. There's really scant為數甚少scientific evidence to support those的科學佐證, and I did not find them pleasant.
JACOBS: So I was pretty happy to find the science.
SIMON: They don't improve on what nature does不會促進排便或是正常的腸道蠕動, right?
JACOBS: That's right. You don't really need them. One thing that I definitively will be continuing, probably the biggest change in my life, is that I have divorced myself from完全界除了 the sedentary life只窩著坐著不動的生活, which is hard because I love sitting down. I was very good at sitting. But I've just read so much research about how horrible sitting is for you. It's really bad. It's like Paula Deen 美國知名廚神，也是藝人glazed-bacon-doughnut bad這句話是說，坐著不動的壞處，就好比名廚手下做出來放著培根與糖霜的甜甜圈(那麼不營養). So I now move around as much as possible. And I wrote this book on a treadmill跑步機, so...
SIMON: Right. You got the treadmill standing desk高腳書桌(讓人站著寫字) that used to...
JACOBS: Exactly.
SIMON: ...used to only exist in "The Jetsons."傑生一家(卡通)摩登原始人The Flintstones未來版
JACOBS: That's it. I'm living in the future. And it took me about 1,200 miles to write the book.
SIMON: A.J. Jacobs, his new book, "Drop Dead Healthy."英文的drop dead字意原本是…到死，中文可翻成”超”…所以這本書的書名，可以翻成健康得要命(超級健康守則)
A.J., good health to you.
JACOBS: Good health to you, Scott
參考資料: