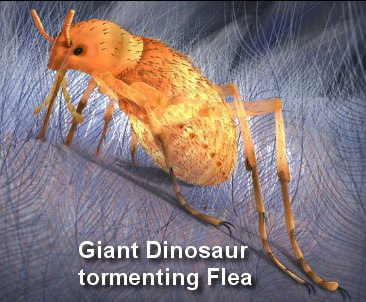 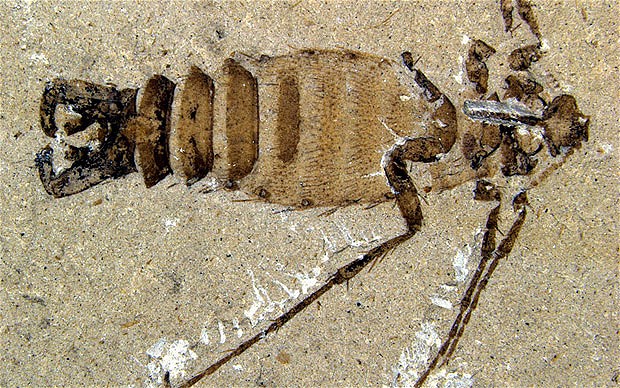 Fossil-hunting scientists尋找化石的科學家 are coming to grips with正在認真研究a new discovery that could change forever how we think of dinosaurs. What they've found is that dinosaurs may well have been tortured折磨 by large, flea-like bloodsucking類似跳蚤會吸血的insects. NPR's Christopher Joyce has more on this entomological revelation昆蟲的新發現.

CHRISTOPHER JOYCE, BYLINE: Yes, it appears to be true. The greatest predators掠食者 that ever roamed漫遊 Earth suffered just as we mammals哺乳類動物 did - and still do. Fleas跳蚤 were thought to have evolved演化 along with mammals like us. They like our soft skins and a diet of warm blood. But now scientists in China have discovered Pseudopulex jurassicus似蚤 and its equally tyrannical蠻橫的 cousin, Pseudopulex magnus巨大似蚤 - magnus as in great. And indeed, they were big - several times as big as current fleas - and equipped to feed.

GEORGE POINAR JR.: So they have this large beak喙狀嘴 that's, oh, it looks horrible. It looks like a syringe注射器, you know, when you go to the doctor to get a shot打針 or something.

JOYCE: Zoologist George Poinar Jr. is an emeritus榮譽 professor at Oregon State University. He studies life forms生物 preserved for millions of years in amber包藏在琥珀裡數億年, ancient tree sap樹汁. He calls these insects pseudo-fleas偽(似)蚤. They were found in amber in China. Besides being bigger than modern fleas, their legs are unusually long. Poinar says the legs don't look like they're built for jumping, that perhaps for grabbing onto緊抓著 the bump-like scales突起的鱗片或介殼 on dinosaur skin so they could jab刺戳 that proboscis能吸吮的管狀器官 into the skin between them.

JR.: Let's face it, they're the only small creatures that would dare attack a dinosaur. Anything else that was larger, it would definitely have been eliminated滅除.

JOYCE: It's been a veritable真正可稱得上是 flea circus跳蚤馬戲團 lately in the fossil-hunting business. Just last month, Chinese scientists announced the discovery of another set of flea-like insects preserved in amber. They were much like the new ones Poinar examined, which are described in the journal Current Biology（當代生物學刊）. Poinar says the world 150 million years ago apparently was getting increasingly buggy充滿蟲子的, and those insects were changing the dinosaurs' world. They did that in at least two ways. Because they were pollinators傳粉的昆蟲, insects probably encouraged the evolution of flowering plants成就了花卉植物的演化 rather than fernlike plants蕨類植物. Plant-eating dinosaurs that couldn't adapt to a new diet適應新的飲食習慣 would have been in trouble. And scientists who study dinosaur feces排泄物 - yes, they do that - say dinosaurs had diseases, parasites寄生蟲, worms. Poinar says they probably got some of them from insects like these pseudo-fleas.

JR.: To a lot of them, this was something brand new that they hadn't been exposed to暴露於 before, and it would have decimated大量滅殺 the populations. And it wasn't just one disease but a combination of diseases.

JOYCE: He says those diseases could have hastened加速了 the demise死亡 of dinosaurs. It does make you wonder if dinosaurs had had DEET待以妥，又稱敵避胺或是避蚊胺, where would we be now?