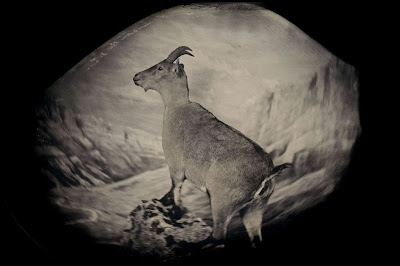 
It's Called 'De-Extinction' — It's Like 'Jurassic Park,' Except It's Real
STEVE INSKEEP, HOST:

Consider the premise假設/前提 behind the novel and movie "Jurassic Park." The notion in that movie - which came out 20 years ago - was that bits of dinosaur DNA could be used to grow new dinosaurs and bring back species from extinction. Reporter Carl Zimmer writes in National Geographic that scientists are actually working on de-extinction終止滅絕, the real-life resurrection讓動物死而復生在真實生活裡上演 of animals that have been lost in recent decades. He says it could happen soon for some animals, even if a T-Rex霸王龍is unlikely to walk the earth again.

CARL ZIMMER: We're not going to bring back dinosaurs, because we can't get at their DNA, but now we're at the point, 20 years later, where science has developed to the point where we can actually talk seriously about possibly bringing back more recently extinct species絕種的物種.
INSKEEP: What is the closest anybody has come to actually doing this?

ZIMMER: The closest anyone has come to doing this was 10 years ago. There was a species of mountain goat山羊 called the bucardo布卡多野生白山羊 which lived in the Pyrenees Mountains庇里牛斯山 between Spain and France.

ZIMMER: And conservation biologists had been trying to save it for decades and it was just spiraling down急速下降. It had been over-hunted濫捕 to the point到一種程度 where the species just couldn't go on.

INSKEEP: There were just a handful of少許/為數甚少 them left.

ZIMMER: And then finally the last bucardo died in 2000.

INSKEEP: A tree fell on it.

ZIMMER: That's right. A tree crashed down on this poor animal and it was dead, but before it had died, they had saved some cells from it. They had plucked摘取 a little tissue from its ear. And they got the DNA out of those cells and implanted eggs which they put into a surrogate代理 mother, a hybrid goat-ibex羱羊(一種混種的野生山羊), and one of these surrogate mothers gave birth to a clone複製 bucardo.

Unfortunately, it only lasted about 10 minutes. It had really serious birth defects出生缺陷. But that was the first time that any species had come back from extinction.
INSKEEP: It lived.

ZIMMER: It was alive.

INSKEEP: So they got close就快要成功了, but that's the closest anyone has come, and that's like a decade ago, was it not?

INSKEEP: So what makes you think that the moment has truly, truly arrived?

ZIMMER: Two reasons. One reason is that cloning has gotten much better as a technique. So scientists know how to get animals cloned efficiently, and to make sure that they're healthy when they're born. Not only that but, you know, scientists can work with material that before would have been thought to be too degraded墮落的/不入流的.

So there's a project going on now, through a nonprofit非營利組織 called Revive and Restore in collaboration with與…合作 scientists at Harvard, where they're looking at reviving the passenger pigeon旅鴿(過去曾有五十億隻在美國). Now, the thing is that there are no viable可以使用的 cells of passenger pigeon left. They've been dead for a century. And so all you have are these museum specimens博物館標本. But they have fragments of DNA.

So what you can do is you can figure out what the sequence排序 of the passenger pigeon genome基因 is, and then you can synthesize合成 little chunks一小塊 of its DNA and then paste黏/附著 them in to the DNA of a living pigeon.

INSKEEP: But as scientists go forward with this, what are the ethical道德 problems that are raised?

ZIMMER: Well, some people might feel that, you know, this is wrong because, oh, we're playing God扮演上帝. And I think that that's kind of a dubious argument含糊的爭議, because in a lot of cases we drove these species extinct是我們導致這些物種滅絕的. So that, I think, we can set aside放在一邊. I think a deeper, more important question is, is this actually a good use of resources to deal with what is an ongoing extinction crisis持續發生的物種絕種危機.

ZIMMER: What is happening now is not just business as usual. We are dealing with an extinction crisis primarily of our own doing我們自己的行為 through pollution, through climate change, through all these different factors.

INSKEEP: Carl Zimmer wrote an article in National Geographic about efforts to take animals that were extinct and bring them back to life. Thanks very much.

INSKEEP: Oh, now this is cool. National Geographic hired a photographer who used a nearly extinct photo technique幾乎快要絕跡的攝影技巧 to capture images of actually extinct species. See those images at NPR.org.

Copyright © 2013 NPR. All rights reserved. No quotes from the materials contained herein may be used in any media without attribution to NPR. This transcript is provided for personal, noncommercial use only, pursuant to our Terms of Use. Any other use requires NPR's prior permission. Visit our permissions page for further information.


NPR transcripts are created on a rush deadline by a contractor for NPR, and accuracy and availability may vary. This text may not be in its final form and may be updated or revised in the future. Please be aware that the authoritative record of NPR's programming is the audio.