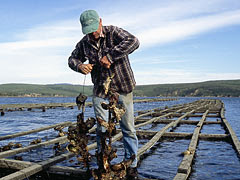 LINDA WERTHEIMER, HOST:
The shellfish industry on the West Coast has had a bumpy few years and increasingly, it is pointing to climate change as the cause. Scientists believe the oceans are becoming more acidic as they absorb the increasing amounts of carbon dioxide in the air, and they are not sure if oysters and other shellfish will be able to adapt to this change. Lauren Sommer, from member station KQED, has this report.
LAUREN SOMMER, BYLINE: Terry Sawyer does a brisk business in __________________.
TERRY SAWYER: I take the shucking knife and I'll go into the hinge. You see there's no meat on the top shell?
SOMMER: His farm, Hog Island Oyster Company, is about an hour north of San Francisco and today, his workers are sorting two kinds of ______________, Kumamotos...
SAWYER: Nutty, creamy flavor...
SOMMER: And Sweetwaters.
SAWYER: Some people do describe it as sweeter.
SOMMER: The oysters grow up in big mesh bags that sit in the cold waters of the _____________. Sawyer gets the oysters from hatcheries in Oregon and Washington, but a few years ago, he started getting _________ from his suppliers. They couldn't _________________.
SAWYER: They would have tens of thousands of gallons of tanks that were absolutely full of larvae and they'd had the entire system die.
SOMMER: Their intake pipes were pulling in the same sea water, but now it was more ____________, which makes it harder for oysters to build their shells. The ocean is basically a giant ________________ for carbon dioxide and scientists say sea water has become _____________ percent more acidic since the start of the Industrial Revolution. Sawyer's growing his own oyster larvae now so he'll have a more ______________ supply, but he says there's no question that ____________________ is affecting his bottom line.
SAWYER: We don't know if we're going to be able to survive the very real trending that is going on out there.
SOMMER: It's a trend that doesn't just affect oysters. On a rocky point farther point, about two hours from San Francisco, oceanographer Tessa Hill of the University of California, Davis shows me tide pools packed with California mussels. These mussels and other shelled animals like sea urchins and tiny marine snails are _______________ to the marine food web, she says.
TESSA HILL: Probably most people like the fact that we have things like ___________ and salmon along our coast and those organisms are likely to be impacted because their food _____________ will be impacted.
SOMMER: In __________ years, oceans could be more than twice as acidic. So, Hill says, they're trying to find out if marine life can _______________. The mussels and sea urchins here could help answer that, since they're already part of a naturally occurring _______________.
HILL: They're facing the most acidic water that you'd see in the ocean today.
SOMMER: Marine life on the West Coast is blasted with acidic water from the deep ocean during seasonal upwelling in the spring and summer. So maybe they've ________________ ways to handle it.
HILL: SB would be Santa Barbara; MB is Monterey Bay...
SOMMER: Inside their lab, Hill shows me jars full of young mussels almost too small to see. Each jar is from a different part of the West Coast, from central Oregon to southern California. Scientists are growing them in more acidic water to see if they have key __________________ differences.
STEVE PALUMBI: We found they have lucky genes.
SOMMER: Steve Palumbi is a biology professor at Stanford University who is also working on the project. He found that some West Coast sea urchins have around ________ genes that make them better adapted to more acidic water. That makes them more likely to ____________ and reproduce.
PALUMBI: This is good news because these organisms have the ___________ to deal with more acidification. But it's not good news forever, because all it does is give us a little _____________________.
SOMMER: And not much breathing at that, says Palumbi. The ocean is acidifying faster than it ever has before. Organisms will ______________, he says, but probably not fast enough to _________________. That means the shellfish industry could face even bigger ______________________ down the road. For NPR News, I'm Lauren Sommer in San Francisco.